If you've missed my last couple of posts, I've been showing you what I spent last weekend doing when I hosted a baby shower for my friend. Today, I'll show you to most important part, the food! If you want to see the printed material and the decorations, click on the links. 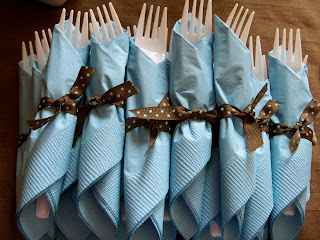 So it wouldn't be a cookies and milk themed party without cookies and milk. Now I know they make milk in a bunch of varieties including gross ones like Banana and Strawberry flavoured, but frankly, I'm only a fan of the white and chocolate ones. And since I knew I would be drinking the leftovers, I stuck with my favourites. One of the guests couldn't have dairy so I was going to do soy, but she assured me she hates soy milk so not to get any just for her. 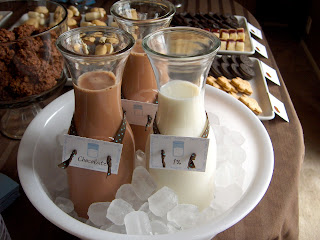 For cookies I made my favourite chocolate chip (a recipe passed down from Grandma!) 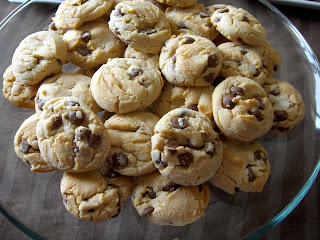 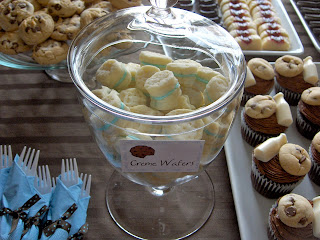 Raspberry Ribbons (I'm SO addicted to these. Very, very dangerous!) 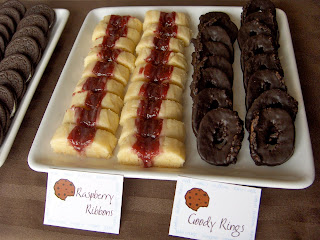 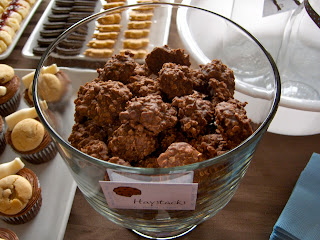 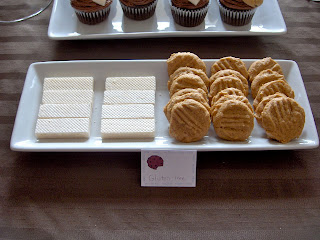 I also threw in some store-bough favourites: Oreos, Maple Cremes, Goodie Rings (the smell of these mixed with the chocolate chip cookies took me right back to my Grandma's cookie tin!) and a lemon gluten-free variety. 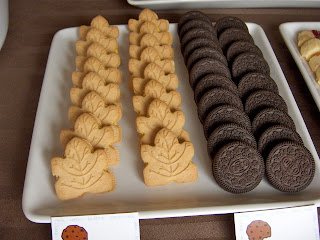 Everyone needs a little cake (don't they?) so I made cupcakes topped with a mini chocolate chip cookie and a white chocolate milk bottle. 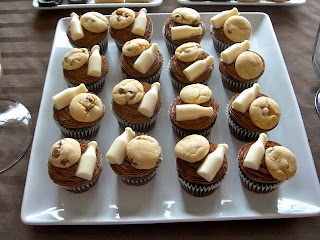 I found the bottle moulds at Bulk Barn when I was visiting my mom last fall and am pleased to announce that they finally opened a store in my city. Apparently they heard my cries! 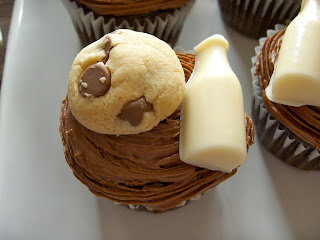 I also got a fruit tray and had coffee, tea and punch for those who didn't want any more cookies and milk (what?!? I have no idea who that would be!). And as I was purchasing easter candy I came across the cookies and creme hershey kisses so they became "Goodnight kisses" 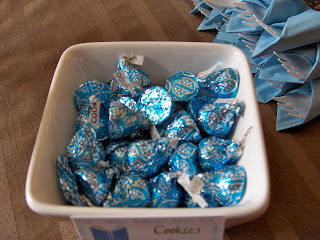 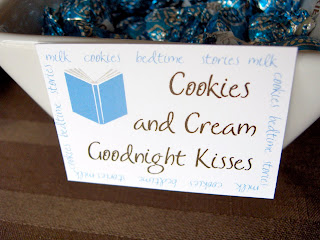 For activities I wanted to be careful what I planned. I know there are some people who LOVE baby shower games and some people who LOATHE them. I didn't think I could have a shower without something to do, so I opted to come up with some activities that people could participate in as little or as much as they wanted and/or would be over quick. So this is what I did. In keeping with the "story" part of the theme, I gave guests a list of nursery rhymes when they arrived (and we waited for everyone to show up). Except they were only given the initials of the title. They had to figure out what each rhyme was and the person with the most got the prize (There was an advantage to coming early. See? It pays to be on time!) I had one rhyme for each letter of the alphabet. The winner had 12 right. I was quite impressed.

Once everyone showed up I had everyone stand in a circle and I randomly handed out the other 2 prize bags. Then I read a story of Mr. and Mrs. Wright having a baby (I found it online and can't remember where I got it. There are variations all over the place). Every time I said the words right/wright or left then they had to pass the bag in that direction. Whoever ended up with the prizes at the end got to keep them.

The last thing we did was make a mad-lib (again, I found the template online) about the new Mom's "experience" of having a baby. Of course it was nothing like her real delivery. I figured this was simple enough for those who didn't want to participate as they then didn't have to suggest words. :)

Then Mom spent the next hour opening gifts and we all took turns holding the sleeping one month old. I asked the guests to each bring their favourite childhood story instead of a card as a way to grow their bed-time story library. She got some great books!

So that's the shower. Now someone else needs to have a baby. I have a few other favourite themes I need to get out of my system. Ha! 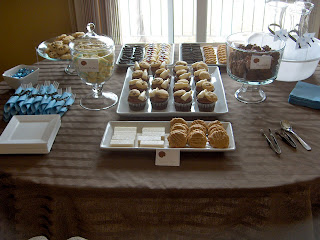 If you want any of the recipes for the food I made, let me know, I'll gladly send them to you!