The Death of the Soother

This was a common scene at our house from basically the time Kaitlyn was born until a few weeks ago: 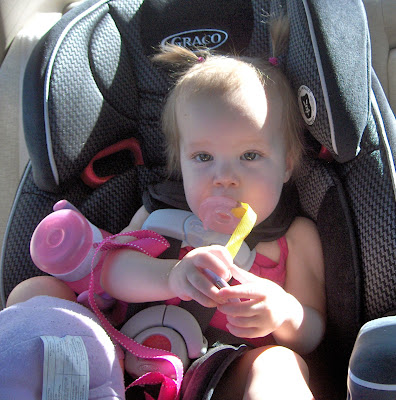 By the time Kate reached a year old I started putting rules on the soother sucking. She could have it in her bed or if we were out and it was nap-time (really for the sanity of those around us...).

Well, then she started the crazy drooling and it got to the point that unless she had a soother in her mouth she would soak (and I'm talking, it could be wrung out) 3-4 shirts a day. So then I got lazy and let her have it.

Then she stopped drooling and I decided I was going back to the rules. One day, it was still clipped to her jacket from the day before when she found it. I walked around the corner to this scene:

Then one day in late November (maybe early December), she had it for her nap, and upon waking managed to smuggle it out of her bed. And by bed time it was lost.

I searched everywhere and she was no help in finding it. At 2 in the morning when she was crying for it, Mark searched the house and also couldn't it.

For three days she cried herself to sleep, taking about an hour to do so, mourning the loss of her beloved "suckie."

Then Mark took out the garbage and saw something that looked like a fork poking through the side of the bag. He opened the bag and sure enough one of Kate's little forks had been thrown out. Along with her suckie. I'm pretty sure she knew she did it too. We washed it and put it in the closet, but she doesn't know it's there and so we are now soother free! Yea!

Which is good because I was afraid she'd still have that thing when she was 3.

Now to work on the thumb sucker...

And I kind of wonder what else has gone out in the garbage??

Email ThisBlogThis!Share to TwitterShare to FacebookShare to Pinterest
Labels: My kids