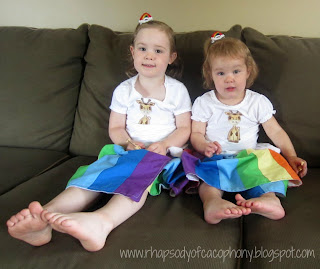 I know, I'm totally overdue on this post. I started it long ago, but got stalled editing pictures. I've been bugged to get it done, so I'm going to stop putting it off!

As my regular readers know, I'm a ridiculous planner. I started seriously pulling together things for this party in April. And then decided I would use May to focus on Mady's Fancy Nancy Party and June to focus on Katie's party.

I didn't foresee one thing.
Being pregnant in June.
Anyone who has been pregnant probably knows that what that really means is that you can't get out of bed (or at least off the couch) for about 6 weeks (or more!).

But I still needed to pull together a Noah's Ark Two-by-Two party! 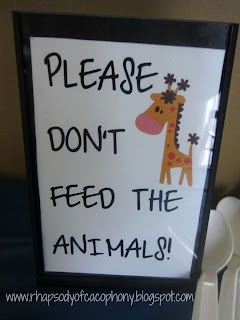 I finally started actually putting things together just a few days before her party. I'm glad the plan was pretty simple! The most time consuming part was the outfits that I made the girls and those came together pretty quick. In case you're wondering here is the tutorial for the rainbow skirt and the etsy shop I bought the appliques from is The Applique Patch.

I designed the invitation on my silhouette and printed it out at Staples (I didn't want running ink and their colour laser printers stop that from happening). The Noah's Ark boat and animals were shapes in the library.


The week leading up to the party we had fabulous weather. Ridiculously hot even, so I had originally planned that we would have the party outside. But then that morning there was a 40% chance of rain. And in Calgary that basically means it's going to rain.

So we moved to an indoor plan. Which meant it didn't rain. 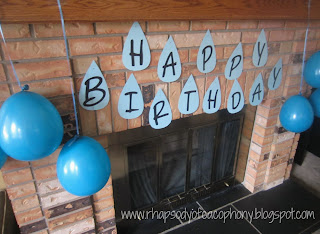 For decorations I made a birthday banner shaped like raindrops out of paper (again using my silhouette), hung balloons as water drops (and, yet again, if I had been allowed to stand on high ladders I would have strongly considered hanging them from the ceiling for a more watery feel. Why am I always pregnant for second birthday parties??). 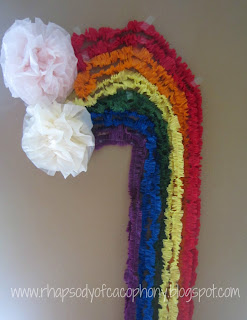 I ruffled streamers on my sewing machine and made a rainbow with some tissue paper poms as the clouds. Then on the banisters around the room (we have a sunken living room) I taped up some colourful umbrellas. 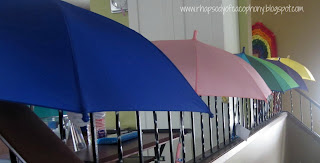 For food we had snacks since it was a morning party: cheese, crackers and sausage as "boat building materials," animal crackers, a rainbow fruit platter and jello rainclouds. 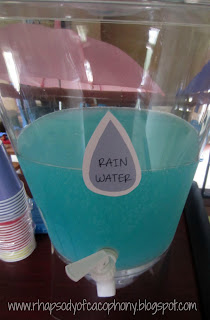 The cake I made to look like an ark using some oval pans and a little loaf pan. And lots of chocolate finger cookies. Which ended up tasting better than my original fondant plan. 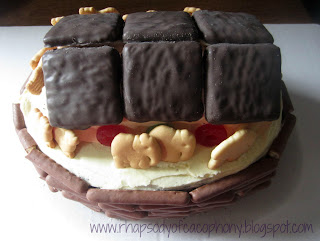 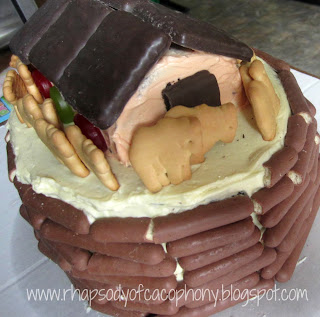 That plan got scrapped because one of my pregnancy aversions is looking at fondant. (I seriously haven't read party blogs in 2.5 months. Can't do it.) Mady's cake almost killed me. I knew I couldn't muster up the courage to do it again in a month. And really, I crave lots of chocolate. So this was win/win. 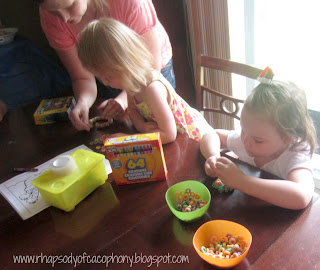 For activities we had the kids make rainbow necklaces out of gimp and frootloops upon arrival. Katie chose instead to just eat them straight out of the bowl. 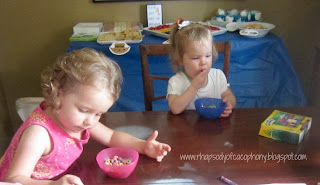 Then I took the kids into the living room and I went over the basic Noah's ark story (which I was using to guide the activities, but we ran out of time, so technically we didn't finish the story. Good thing I know all the parents can tell it at home!). I bought a pack of little animals off of amazon (free with my swagbucks. Score!) and I hid one from each pair around the room (actually my Father in law did...Thanks Dad!). I gave the kids an animal to go and find the mate of and when they did I had them bring them back to put in the ark (we have a fisher price ark that I used for this). Then I sent them out to find another. They probably could have played this game for an hour if I had enough animals!

(no pictures of any of this because I was leading it. Someone else may have some though so when I get some I'll add them in)

We sang some Noah's ark songs and got all the parents to help us make a rainstorm with our hands (by rubbing your hands, then snapping and then slapping your legs).


Next, I pulled out the playdough and the animal shaped cutters and let them go to town. We had our Noah's ark toys and books out for the non participators and colouring sheets for those who preferred that art outlet. 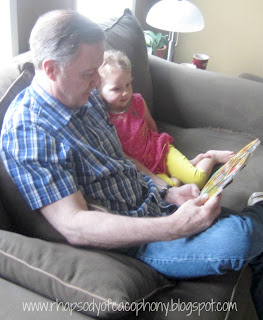 After that we had snacks and cake and opened presents.


We ran out of time to blow bubbles so I sent them home with the kids. 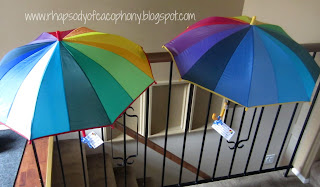 For the favours each kid got to pick an umbrella to take home (The tag said "Here's an umbrella to keep the rain off you and to help you remember the day I turned two!"), I gave them some of the animals from the game, and (my stroke of genius) a Dove chocolate bar. Because you can't have the ark without a dove, right??? I had wanted dove eggs but forgot to get them at Easter. Whoops.

So that was the party. Katie seemed to like it (as much as two year olds can tell you these things).

We are so blessed to have such lovely friends and family to share these special times with. Thanks everyone for coming! I totally forgot to get a group shot of the kids (someone please start reminding me to do this at parties!) 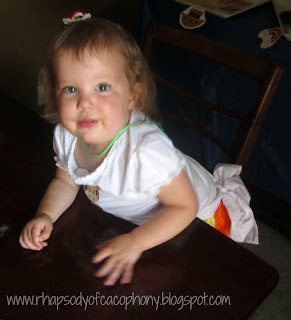